The weather is getting warmer, summer's just around the corner, and I know y'all are wondering how Whitey McWhiterson gets her glow on in the hot months. Because my dermatologist is a friend and I'm concerned that she may read my blog, I'll give you the official answer: Tan Towels. Tan in a bottle. Spray tans. Anything but real sun.

But, truth time? I love the pool, and specifically, I love laying out at the pool. (Sorry, Shellie, but I did finally quit the tanning bed. Sorta. Mostly.) I can outlast most before jumping in the water to cool off. I need to be hot-hot-hot and practically dehydrated from sweat before I'll move off my chair. Flipping from stomach to back to stomach again is as athletic as I get.

I was born blonde and old pictures show me tan, but somewhere along the way my skin became practically translucent. I don't know what the problem is, but I don't like it. I envy naturally tan people. Fact: Everyone just looks better with tanned skin.

Two summers ago, Amy, Erin, and I spent a great deal of weekend time at different pools. We bounced around from apartments to the country club in Hoover to our favorite, Ross Bridge Resort. We made spa appointments in order to gain pool access for the day, and then we'd plant ourselves on lounge chairs with cold drinks and about 19 different magazines. Because we all three worked for magazines then, we'd mostly read a page and then critique it, read a page, critique. When we got tired of reading and critiquing, we'd talk. And talk and talk and talk. We solved much of the world's problems on Saturdays and Sundays that summer. It was the inaugural Pool Tour. 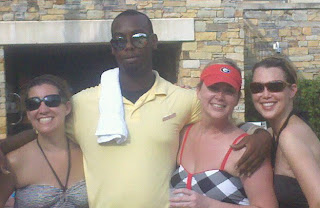 This is Jay, the pool bouncer at Ross Bridge. Jay takes care of things. 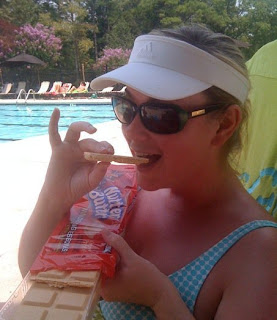 Last summer we spent most weekends at my pool, which we dubbed Melrose Place because that was the scene by late afternoon. We may or may not have taken Champagne and Styrofoam cups along with our magazines and sunscreen. Pool Tour 2011 didn't require as much touring, but it was totally awesome. 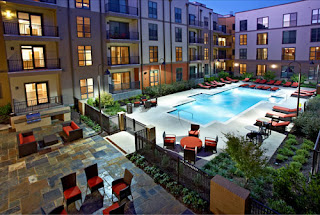 I'm moving at the end of May, so the Cityville pool isn't really an option for Pool Tour 2012. We're going to have to get creative. Call in some favors at Ross Bridge. Crash some poorly monitored apartment pools. Bum guest passes to the country club pool from Erin's parents again. And I definitely think we should find a way to sneak into a nice Hampton Inn pool. I mean, no crowds, right? We like a two-day pool weekend: all day Saturday and after church Sunday into the evening. Have you ever tried worrying about work and life and money and relationships with a cold drink in your hand, staring out at blue water from beneath an umbrella? Doesn't happen. And there's nothing better than going to bed with the faint scent of sunscreen still on your skin, tight and slightly burned from a day of fun in the sun with your friends. 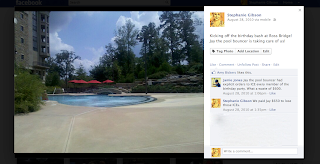 Jamie tried to terrorize us at the Ross Bridge pool in 2010, when we celebrated mine and Erin's birthdays there with pool and spa time before Todd drove us to dinner and karaoke in a rented 15-passenger Econoline van. Yeah, that's a sentence I never thought I'd be typing either. 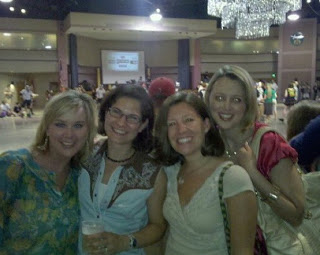 Don't we look relaxed? Birmingham roller derby, after we got ready with all the free Aveda products at the Ross Bridge spa following a marathon pool-and-daiquiri day.

Posted by Stephanie at 7:17 PM

I'm a bit behind on my blog reading, but do you know what else they don't sell in Canada? Rotel. Send Nutter Butters and Rotel. Stat.

Nice blog, i am so impressed by the info that you've in this website. Thanks for your input. Good luck.