All I want for Christmas…

…is this ring. (It's my birthstone! Totally practical.)

I don't mind if a few of you want to go in together for a group gift.

Nah-uh. Really? Does PETA know the luxuries that Uga is afforded? Bite me, PETA. You are all so dang ridiculous. Besides. We already have a person dressed up as a mascot. That'd be Hairy Dawg.

Posted by Stephanie at 1:19 PM 0 comments

What's in a name?

I'm sitting here on my sofa, drinking coffee and eating breakfast (leftover pan of cappuccino-frosted brownies), watching Gilmore Girls, and scrolling through my music on iTunes. And you know what? Artistic people are pretty freaking weird.

I found some WAY strange band names in my library. How do you think bands get their names? I have a few ideas, most of which involve late nights and illegal activities. How else can you explain these?

1. Death Cab for Cutie
2. Big Head Todd & The Monsters
3. Dashboard Confessional
4. Barenaked Ladies (no lady in the bunch)
5. Dexy's Midnight Runners
6. Garbage
7. Hootie and The Blowfish
8. The Killers
9. The Push Stars
10. Sha-Na-Na (courtesy of the Grease soundtrack)
11. The Spill Canvas
12. The Velvet Underground
13. The Weepies
14. Weezer
15. The 5th Dimension (who sings one of my very, very favorite songs ever thank you amen)
16. Band of Horses

I, of course, got curious about what else is out there (read: nosy), so I went on over to the Google and found The Canonical List of Weird Band Names. You can find it at Bright Lights Film if you want, but the tagline is "the peculiar & the profane," and trust me, some of them were profane. I'm not going to link to it, just hit up the trusty Google if you're interested. 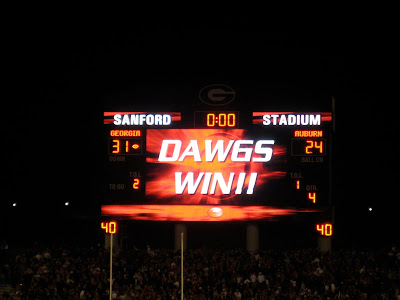 No trash talk. But I am thankful for a favorable outcome of Saturday's game. And I would very respectfully like to say "GO DAWGS!" 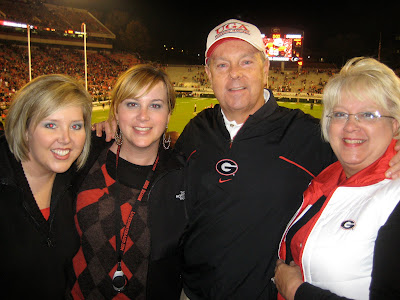 Most recent game photos start with #34.

Give me a break. It's been a sad little season. 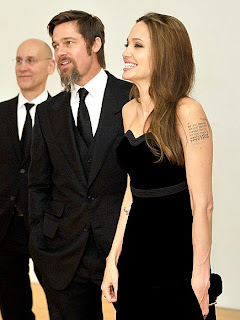 That's pretty much all I have to say.

I should have plenty of time to blog now that I am unemployed. Ha.

I've started a new blog as an outlet for my design hobby and ridiculous love affair with beautiful images of home decor. Check it out here.

And lest you think crazy stuff is no longer happening to me, I'll leave you with this quick story.

I went to Publix last night to pick up a few things for Saturday's tailgate. I needed quite a few spices for the rib rub, and I was delighted (that's right, delighted) to see that a particular brand was buy one, get one free. I couldn't find this brand on the spice aisle, but after double-checking the flier I saw the spices were located in the produce department.

I pushed my buggy on over where I spent a good 10 minutes circling around, getting more and more frustrated that I couldn't find what I needed. I was just about to ask someone why the spices were not, in fact, located in the produce department when I realized that I was fruitlessly searching in the freaking meat department.

(I did finally find a nice big basket o' spices to search through, right between the limes and clementines. In the produce department.)

Posted by Stephanie at 2:59 PM 4 comments

It makes me think of disgusting ear wax. Right? Right. And what does that even mean? See, it's stupid.

I tried to find a photo for this post on Google Images. Boy was that a mistake.