It's good to have a musical boyfriend.

Benji Madden has already recorded a song about Paris Hilton, and now the Good Charlotte guitarist is helping her with her own music.

Hilton, 27, told E! News that she and Madden, 29, are hard at work on the theme song to her upcoming MTV reality show My New BFF.

"Benji and I have been working hard on it," she said. "He's helping me write the lyrics for the song and then I'll sing it, too."

The couple, who've been dating for four months, are laying down the track at a studio located, conveniently enough, in her Beverly Hills mansion.

Premiering later this year, My New BFF will follow the former Surreal Life star as she chooses a new shopping buddy from 20 contestants.

Hilton also plans to start working on the follow-up to her 2006 debut CD Paris. "I'll have another album come out, for sure," she told E! News. "I just don't know when yet. I only have the summer off, then I'll be taping another season of BFF. But an album is something I'll do."

EDITOR'S NOTE: I will admit to a slight enjoyment of the Stars Are Blind ditty. Slight.

Also, why will she be filming another season of this show? I mean, the whole point is to find a new BFF and stick with her, right?

Posted by Stephanie at 4:31 PM 2 comments

New post title below for the flip flop-pizza fiasco.

Posted by Stephanie at 9:51 AM 2 comments

Last night I went to Target to pick up just a few things, so I got a basket instead of a buggy. When I got to the checkout line—and let me say here that the Target on Hwy. 280 never has enough lanes open—I put the basket on the conveyor belt. I wasn't really paying attention, just going through the motions of moving in the line, and when my turn came, I moved on up to the counter and got out my debit card.

As I was fumbling around with my wallet, I heard the cashier sigh heavily and slam a few things out of the basket. I looked up, and all of the sudden, she flipped my basket over on its side with a huge grunt, starting raking stuff out, and then she flipped the darn thing completely upside down. Stuff was rolling everywhere, including glass bottles that were spinning and slamming into the sides of the conveyor platform. I was so stunned I couldn't speak.

Now normally I do unload my basket, but really, does it matter? I mean, either way, she has to pick up my items and scan them, yes? So, sorry, Jessica of Target 280. Didn't mean to put you out. But she better be glad my pickle jar didn't bust everywhere.

Posted by Stephanie at 9:43 AM 4 comments

I took this photo a couple weeks ago when my sister was in town. We were sending a picture message to my brother to see if he liked this shirt because we were trying to decide between it and another one for him. When I took the picture, my phone display only showed the shirt, but when I flipped open my phone, I started laughing. This is just funny to me. Laurie's eyes look so creepy! 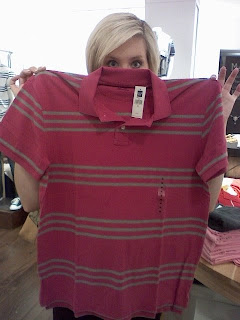 Posted by Stephanie at 9:25 AM 5 comments

I'll post the most creative suggestion for a title.

Here's the deal. Below is a picture of my new (and cheap!) sandals from Old Navy. I got them at the beach. They're lovely, no? 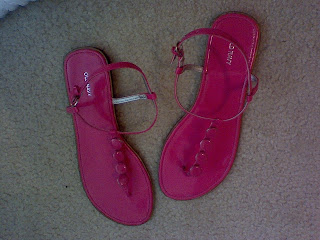 As you can see, they don't offer much support and little distance between my feet and the ground. No biggie.

Except, as we were strolling around Pier Park at the beach last weekend, I stepped on an uneven part of the pavement, my right foot slipped off the shoe a bit, and my toe sunk into something moist and cold. And when I looked down, I saw that my big toe was encased in a cold slice of pizza someone had dropped on the ground.

Posted by Stephanie at 9:19 AM 5 comments

I really can't decide who is dumber here: the woman injured by her thong or the lawyer who took her case.

My favorite part of the Today show interview was when Meredith asked the lady if it was the first time she had worn the thong, or if perhaps it wasn't, and the metal piece had come loose after being washed a few times. Marcrida replied, "No, Meredith, it wasn't the first time, but I have a lot of underwear from Victoria's Secret, and so I had only worn this particular pair a few times."

I'll try to fix the hyperlink from home later.

Posted by Stephanie at 9:14 AM 2 comments

I'm at the beach, and I forgot my camera cord. So, nothing till I get back home. But the best news of all is, I'm now posting on my brand-new MacBook!! photo taken with my phone

Posted by Stephanie at 5:38 PM 3 comments

Does this only happen in the South? 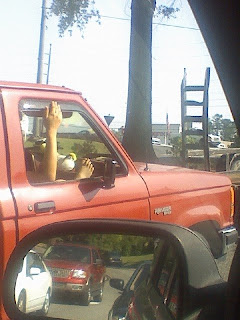 Because, man, once it gets hot here, out come the gross nasty feet on the dashboard! Ew. Just, ew.

Posted by Stephanie at 9:39 AM 3 comments 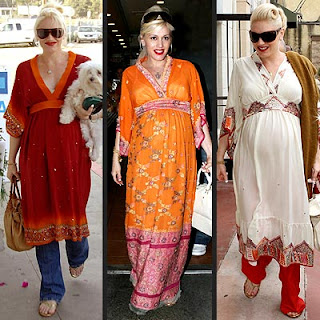 Dude. Does this woman ever have a bad day? I think la Gwen is so glam. I love her. Maybe a little more than is healthy. But, never do anything halfway I always say!

Posted by Stephanie at 1:55 PM 4 comments

Missed Me, Missed Me

Now ya gotta kiss me.

I always take things one step too far.

I'm back and better than ever. Well. That's a lie, but I am back. I'm actually worse than ever because I'm temporarily unable to upload photos. Hence, the stolen Web pics. I'm working on it. Till then, we're back to blog phase 1 postings, sans photographs. Please don't make fun, Bo.

But I know all you guys really want to see is my witty and charming written word. Yeah.

Posted by Stephanie at 1:47 PM 6 comments

Help Me Find the Music

So I really dug (digged?) the music in What Happens in Vegas..., but to my dismay (bad luck! misfortune! get the Vegas play?) the movie studio didn't release a soundtrack. Sigh. Followed by much. heavier. sigh. I was able to track down one song, Love by Matt White, but I'll give lots of free blog love to anyone who can find me a comprehensive list. Go!

Posted by Stephanie at 1:42 PM 4 comments

This never-ending trend of big-busted and pregnant (ew, seriously?) women refusing to wear bras? It has to stop. Please. For the love. It's not flattering, and I know it's not comfortable. And, really, Ash, how could you ever make fun of the Britster and then go and pull this? Pot, meet kettle.

Posted by Stephanie at 1:36 PM 7 comments

I'll be back. (In my mind, I said that the way Ah-nold does.) Soon, I promise! Thanks for not being snarky.